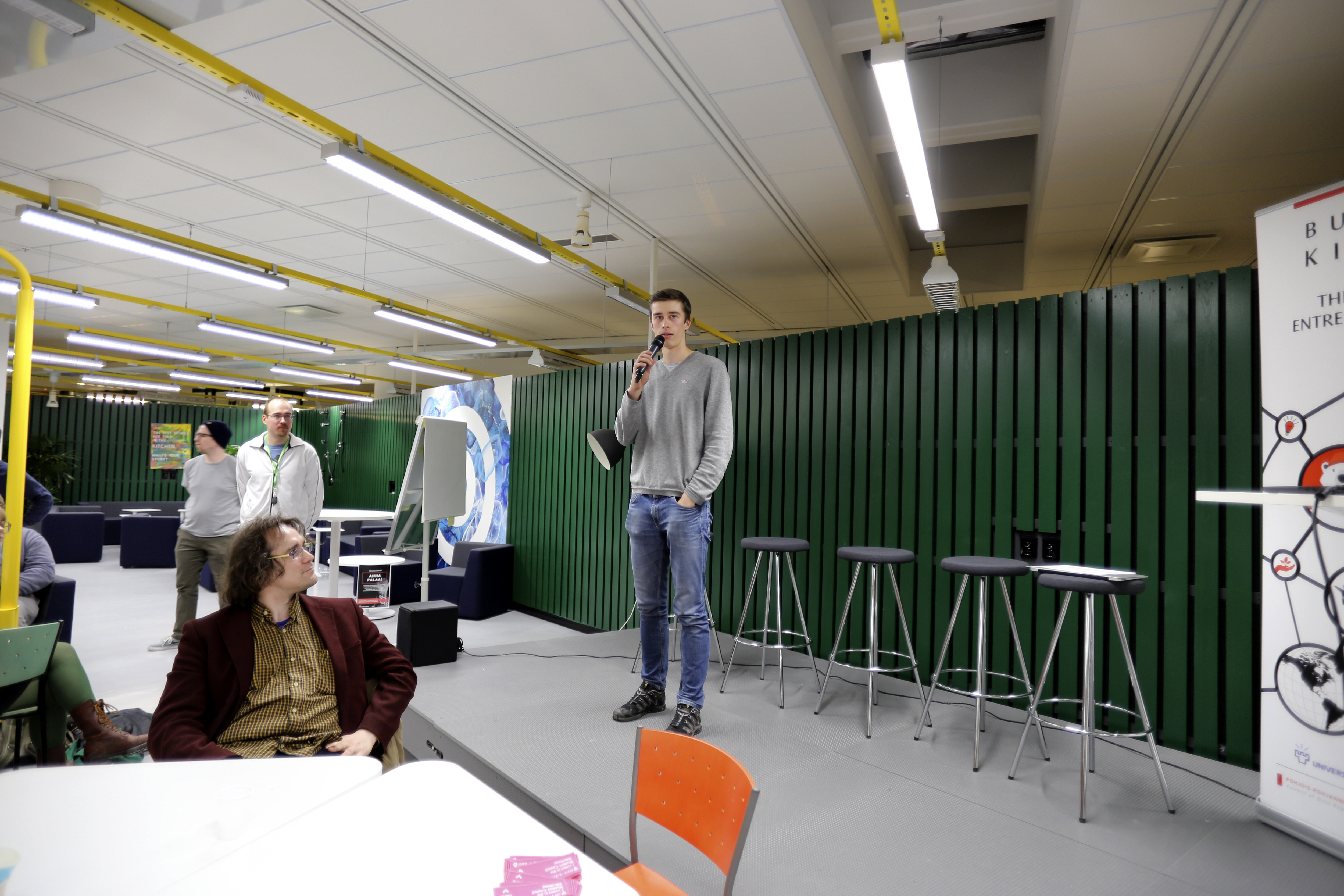 The results of the Student Council Elections were announced on Tuesday, 7th of November. In the picture, the microphone is held by Eelis Palokangas of Kontinkangas electoral alliance. Palokangas wins a whopping number of votes (230).

The results of the Student Council Elections have been announced on Tuesday, 7th of November.

The Centre Party students managed to increase their tally by two seats, that is, from one seat to three seats in the student council. With one seat, a new electoral alliance, the Alliance of Academic True Finns in Oulu (Oulun Akateemiset Perussuomalaiset), were elected to the council.

TeTa (The Coalition of Technology and Business Students) heads the poll with a number of 1,051 votes. With this result, TeTa keeps its 13 seats in the student council.

All five candidates of the Kontinkangas electoral alliance make their way to the student council. The Alliance of Science Students (Tieteelliset) increases their tally by one seat, that is, from four seats to five. The Green list keeps their one seat at the council.

National Coalition Party Students (Kokoomusopiskelijat) as well as Green-left Alliance in Oulu (Oulun Vihreän Vasemmiston vaaliliitto) did not win any seats in the student council. Furthermore, Joonas-Veikko Härmä and Antero Metso, the two uncommitted candidates, were not elected.

All Kontinkangas electoral alliance candidates elected to the student council

The big winner of the elections, Eelis Palokangas, a third-year student of medicine, was visibly pleased with the results.

”All the candidates from our alliance got through. That was unarguably our biggest victory. One can not help but be pleased with the results.”

All Kontinkangas electoral alliance candidates will be first timers in the student council. According to Palokangas, their goal in the council will be to bring the Student Union (OYY) closer to Kontinkangas campus.

”We can provide a bit of an outside perspective to the decision making.”

Sebastian Tynkkynen, who also scored big in the elections, said he felt elated after the results came in. He also has a clear vision in mind.

”Naturally I am enormously happy now, we had such an increase of votes when compared to the last elections! Our goal now is to steer the student movement, which we have seen as representing  green left values, towards a politically more neutral direction, and force it to focus on looking after the interests of the students.”

The brand new student representative of the Humanities electoral alliance (Humanistinen vaaliliitto) Silja Lahdenperä said she is both happy and surprised to be elected.

Lahdenperä, a fourth-year student of information studies, told she decided to run in the elections because she wanted to increase the votes for the Humanities alliance.

So far, she has not set herself any large goals in the student council.

”Being a member of the council will no doubt require some learning. Very interesting things are about to happen, with Oulu University of Applied Sciences (Oamk) moving in for example.”

The turnout percentage of the election remained a little lower in comparison to the 2015 student council elections.

Liisa Komminaho, the chair of the Central Election Committee, says she had hoped for an increase in the turnout percentage this year.

”I had hoped the turnout would be a bit higher to what it was in the previous elections. But after hearing the turnout percentage of the advance voting (ca. 21%), I’m happy.”

2017 saw the voting carried out for the first time electronically only. In the 2015 Student Council Elections, a traditional ballot box voting was an option alongside with electronic voting.

According to Komminaho, ”only slight problems were encountered” in the electronic voting this year.

”There were no attacks, or attempts to attack the electronic system. The electronic voting was cut off for a few minutes’ time on Tuesday. No other breakdowns occurred.”

Members of the new student council

Read more about the results at the Student Union’s website.