If the students are not included in the decision-making process, their voice can easily be forgotten. They really are worth listening to — after all, students are the best experts on their studies and everyday life.

Both public universities and foundation universities in Finland are based on an idea of an academic community, and in the community’s core are professors, university staff, and students. This is to make sure that the academic community uses all their know-how when making decisions. These three groups also lead the University of Oulu by representing in different bodies according to the Universities Act and the Regulations of the University of Oulu. Hallopeds are exactly what is needed to ensure that the students’ viewpoints and visions are seen and heard in the university.

As student representatives, hallopeds have the chance to familiarise themselves on how the management of a big scientific institute works. Hallopeds learn meeting and negotiation skills and broaden their own views on decision-making in different administration levels. There are many places where student representation is needed. The University Board of Directors has the highest decision-making powers in the university. Among other things, the Board decides on the essential objectives for actions and finances as well as on the strategy. In addition to the Board of Directors, hallopeds get to represent in the University Collegium, Education Council and Education Management Group, the Faculties’ boards, councils, education committees, and degree program teams. There are also Health and Wellbeing Working Groups, Equality and Diversity Working Groups, and two Restaurant Working Groups.

Hallopeds learn about the University’s quality management and personnel matters as well as education development. The student representative also gets to connect with other representatives in the academic community. Discussing and exchanging views are valuable part of the job.

Besides the internal administrative bodies, the student representatives influence in bodies external to the University of Oulu, such as in the boards of Uniresta Oy, Oulun ylioppilasapu ry (“Student Help Association in Oulu”) and PSOAS, in national FSHS Council and in local Board of Directors of FSHS Unit in Oulu. So, the students’ voice isn’t limited to the university’s walls.

I have myself worked as a student representative on the other side of the dual model, in the university of applied sciences. I participated in decision-making process in internal and external bodies, like campus’s student well-being groups, campus’s study collegium and degree program team. As a student representative, I quickly noticed that not everything is as simple as it seems to students. For example, in the Oulu University of Applied Sciences the need of another study psychologist had been recognised and acknowledged, but it took over a year of lobbying and multiple inquiries and consultations between different bodies to actually make the decision of hiring a study psychologist. The university is run by a huge administrative machine that observes and makes decision which have an effect on, among other things, students’ well-being, education quality, and university’s reputation.

However, I have noticed that even a one small decision can have a domino effect, where one thing or person causes a chain of events. That is why I encourage everyone to apply for halloped: you can be the first domino to cause the change.

There are over 100 student representatives in the administration chosen by OYY’s Executive Board or the Student Council. You can apply for halloped from the beginning of October at halloped.fi. 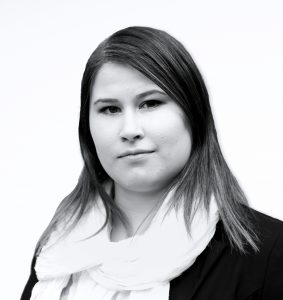