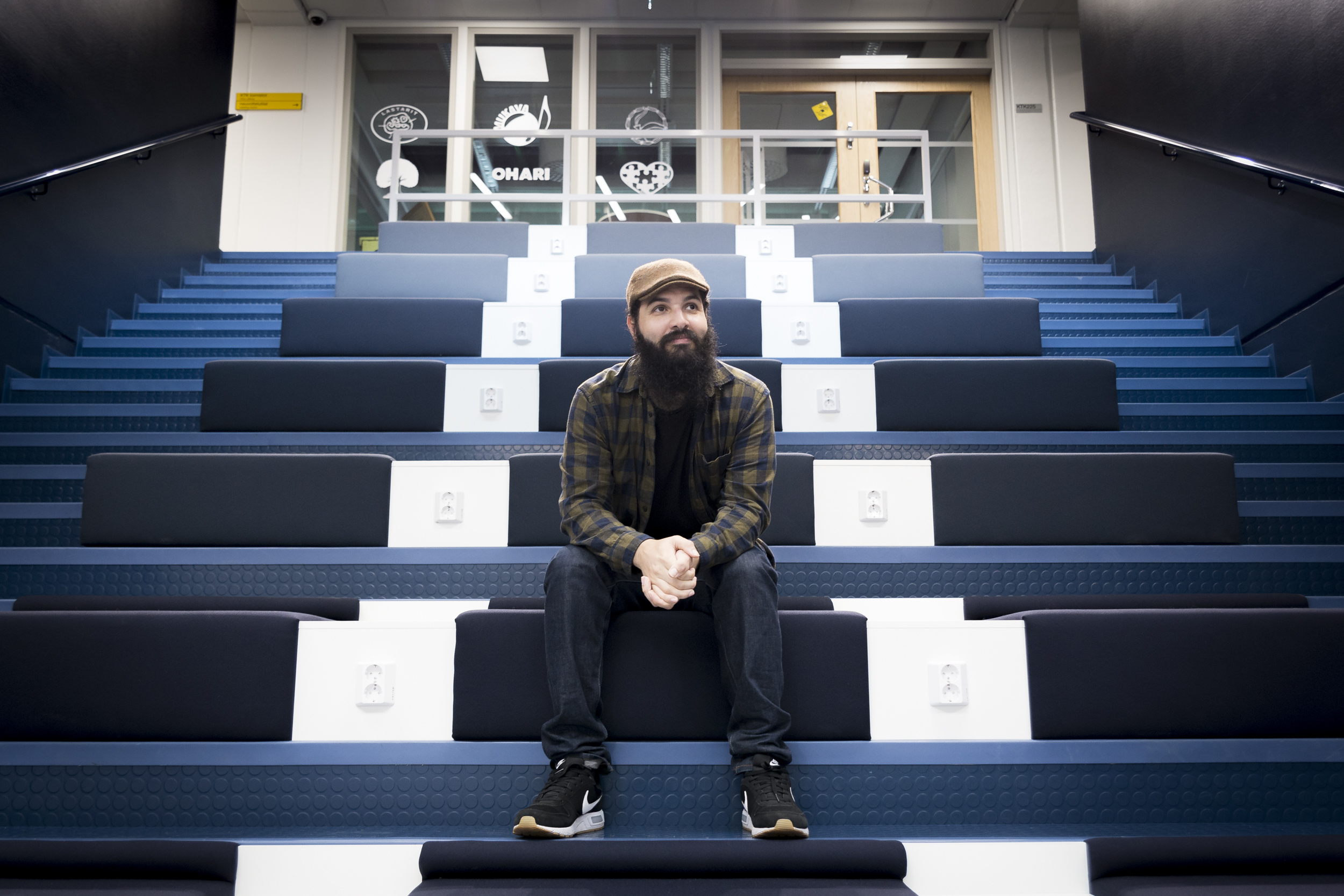 These days Bruno Gioia Sandler is making an impact in the umbrella guild of the Faculty of Education, Kaski ry, as a founding member and the current president. He says fellow students come to him with their problems. Despite his busy schedule, he does not mind, instead, it makes him happy.

Bruno Gioia Sandler was not supposed to end up in Oulu, let alone stay here.

However, when he was studying marketing and business abroad, he met Jenni from Finland.

“You could say I came here for love.”

Five years after coming to Finland, Gioia Sandler is still in Oulu. The reason he stayed was finding a field that felt like his own, even after a rocky start.

The first time Gioia Sandler felt like an outsider was the day of the entrance exam.

“I saw all these young Finnish people and all their markers and their mind maps, and I was there, an older guy with two pens.“

The feeling of foreignness didn not end even when he got accepted into the University. Gioia Sandler was the only international freshman in OLO ry, the organization for students of educational sciences, and the freshman guide didn not have an English word in it.

The struggle did not discourage Gioia Sandler, instead it fed his desire to make an impact.

From personal to the battlefield

“I have a utopian world in my head, and I try to work for that”, Gioia Sandler says.

In the utopia people work for common good and everyone can have an impact, not just the people who have the right cards in their hands.

Personally Gioia Sandler feels like he was dealt a good hand, and that makes it his responsibility to act.

After facing inequality as an international student, Gioia Sandler wanted to improve the situation of everyone facing the same issues at University. In his second year he joined OLO’s board and attacked an issue familiar to him: language.

“If there is no non-Finnish person, you might not even notice something isn’t available in English”, Gioia Sandler says.

Soon the desire to change things grew and Gioia Sandler ran for the Student Council, edari. To his surprise, he was elected.

As a member of the council Gioia Sandler wanted to make international students’ experiences heard, but he was the one who saw things he had been blind to.

“Before then I didn’t have contact with students from other faculties or programs. Edari showed me that all the students are suffering from really similar things”, he says.

These days Gioia Sandler is making an impact in the umbrella guild of the Faculty of Education, Kaski ry, as a founding member and the current president. He says fellow students come to him with their problems. Despite his busy schedule, he does not mind, instead, it makes him happy.

“In my first year I felt like I had struggles one after another and didn’t have someone I could talk to or get advice from. That’s why I’m humbled that people come to me.”

Gioia Sandler wants to stress that regardless of his visible role, he has not been alone, and that there have been a lot of people supporting him and fighting along.

“I hate this picture of the hero. Some people have asked me how do you do it. It’s not just me, there are a lot of people who have been on board”, he says.

Even though he will not agree to being a hero, the president is glad to help.

“I can’t solve almost anything, but at least I can point to who to bother.”

Teaching is a way to make an impact

Before studying intercultural teaching, Gioia Sandler studied mechanical engineering, car mechanics, and business and marketing in Spain. Despite multiple different fields, he did not find the right fit.

Teaching was at no point Gioia Sandler’s first choice or dream career – quite the opposite in fact. Where his classmates tell stories of wanting to be teachers ever since they were kids, the thought of becoming one did not hit Gioia Sandler until later in life.

“For me teachers have been a bit the enemy all my life. I’ve struggled with many teachers”, he says.

Bad experiences with teachers did, however, make Gioia Sandler think about the responsibilities of a teacher, both negative and positive ones.

“I understood teachers affect what the world will turn out like. That’s when something clicked in my head and said ‘this could be my thing.’”

Despite his utopian idealism Gioia Sandler aims to find concrete tools to make a change. For him, teaching is one of these tools: a way to affect his environment.

“You see a lot going on in the news and it feels the world is collapsing and things are out of our hands. Maybe that’s why I continue with what I can have an impact on. I try to bring that fight to the field I have”, he explains.

Failing is the greatest lesson

The path has not always been easy or rewarding, but to Gioia Sandler the most important lesson is to be found in difficult times.

“It might suck and it’s gonna be painful but you can take something out of it.”

To Gioia Sandler the biggest lesson at University has been how to deal with difficulties and get over them.

“Most of the time I’m crashing against the walls and getting frustrated.”

What if the wall will not budge?

Well, then you back up a bit and go in again, faster the second time. You can also try with a friend or try a different angle. And if all else fails, bring a big hammer, Gioia Sandler says.

There are rewarding times too. Gioia Sandler thinks the best is seeing how his own battles have helped others. He thinks that there have been big improvements in taking international students into account.

“I almost got a tear in my eye when I saw that everything in the new OLO freshman guide was bilingual”, he says.

Only five years ago Gioia Sandler was alone, without the needed info or connections. Now thanks to him the new students have it a bit easier.

And even if most students will not see the change, Gioia Sandler does not mind.

“Maybe there is only one student, who it matters to. But thinking that when do something for a minority, it might give them hope.”

Bruno Gioia Sandler, what advice would you give to people starting their studies?
1. ”Be active. University is a safe place to practise. If you cannot participate, at least support those who do. Build more than you destroy. ”
2. ”Get to know yourself by leaving your comfort zone. By knowing yourself you’ll notice when you need to take a step back, and you will not burn out.”
3. ”If you do not know, ask. More experienced people will gladly help. Try to lean on others when you need to.”
4. ”Don’t care about Jodel.”

» 31 years old.
» 5th year intercultural teacher education student.
» Lives in Oulu with his girlfriend.
» Born in Argentina, raised in Spain and has lived all over.
» The president of Kaski ry and a member of the Student Council of the Student Union of the University of Oulu.
» Fluent in Spanish and English, speaks a little bit of Finnish and French.
» Was granted the University’s Equality and Diversity Award in 2018.
» Hobbies include bike polo, cycling, reading and skiing during winter.
» Favourite Finnish word is ‘pistorasia’.
» If he could time travel, he would get involved in student organizations in his freshman year.