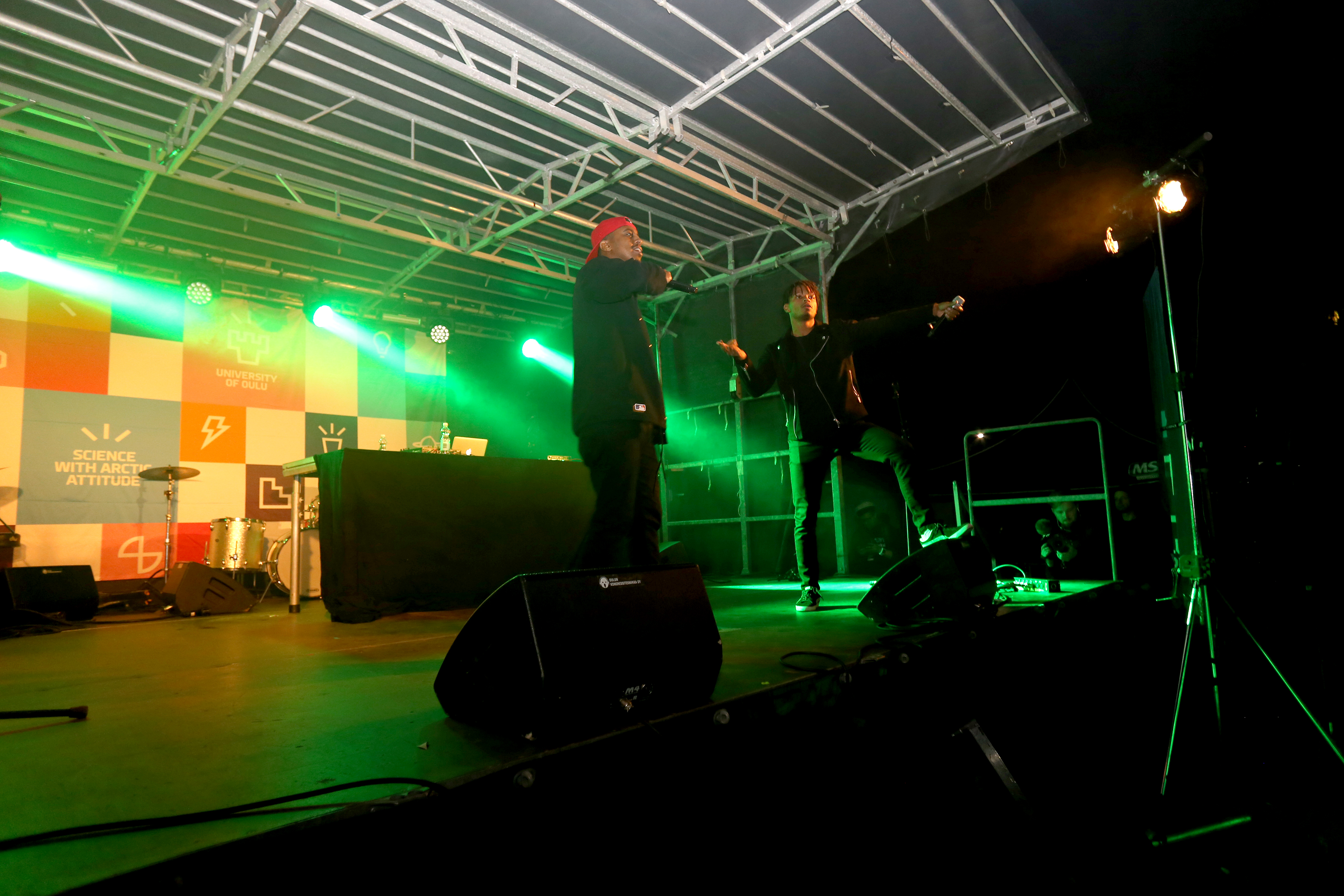 The decision to hold last year's Vulcanalia at the 2T parking lot received good feedback from the guests. Although there were some issues with the lighting of the premises, the parking lot in the heart of the Linnanmaa campus was considered to be a great location for students. Last year, Vulcanalia's main performers were Musta Barbaari (James Nikander, pictured right) and Prinssi Jusuf (Iyouseyas Belayneh). This year's performers will be announced in August.

Vulcanalia, organized by the Student Union of the University of Oulu (OYY), marks the beginning of a new academic year.

This year’s event will be held on Wednesday the 12th of September at the Areena Oulu in Limingantulli. It’s yet another new venue for Vulcanalia: last year, the party took place in 2T parking lot in Linnanmaa campus, year before that in Ouluhalli.

While the location of the Vulcanalia’s evening party may be changing, the traditional Student Fair will remain on the Linnanmaa campus and will be open from 10 am to 2 pm on the same day.

Asta Salomaa, Event producer and Community Specialist of OYY, says that the transition to the Areena was the decision of the OYY’s Student Council.

”Organizing Vulcanalia indoors also facilitates the use of human resources, as there has been a lot of work on the construction of the venue and licensing issues. Now there is less bureaucracy and construction work.”

According to Salomaa, Areena also offers a better user experience: ”It is a huge space with good light and sound technology.”

AREENA ONLY HAS THE CAPACITY TO HOST 2000

Moving the event indoors means that the number of visitors will be lower than last year. Areena only holds up to 2,000 people, whereas last year about 2,500 tickets were sold for the event.

Salomaa can’t say for sure how much Vulcanalia’s entrance tickets will cost. ”I’d say that the ticket will cost roughly the same as last year.” In previous years, the presale ticket cost three euros, while those who bought their ticket at the door paid five euros.

Last year, Vulcanalia was held in Linnanmaa for the first time. According to Salomaa, the 2T parking lot received good feedback from guests. Even though lighting the space caused problems, the parking lot was felt to be at the heart of everything, close to the students.

”The parking lot was a surprisingly functional venue,” Salomaa explains.

Last year, the event was co-organized by the University of Oulu.

Salomaa says she would like this partnership to continue. ”We haven’t reached a cooperation agreement for this year yet, but we would certainly like to continue the cooperation that has just begun last year.”

This year, Vulcanalia will be held a week later than the previous year. Salomaa gives two reasons for this. Firstly, a five-day UArctic 2018 conference will be held at the University of Oulu during the first week of September.

Another reason is to give students more time to buy tickets.

”Last year, classes began on Monday and Vulcanalia was on Wednesday of the same week.”

WHO WILL STAND ON THE AREENA STAGE?

”September is a really difficult time to get artists, because everyone is on holiday after the summer festivals”, Salomaa says.

Last year, there was a persistent rumor on Jodel that the main performer of the evening would be Tommi Läntinen, Finnish singer known for hits Kevät ja minä and Via Dolorosa.

So I have to ask: Asta Salomaa, will Tommi Läntinen be performing at Vulcanalia this year?

The first Vulcanalia was held in front of the restaurant Rauhala in 1995. The venue remained the same until 2003, when Vulcanalia moved to Kuusisaari. In 2012, the celebration moved from Kuusisaari to Toppila.