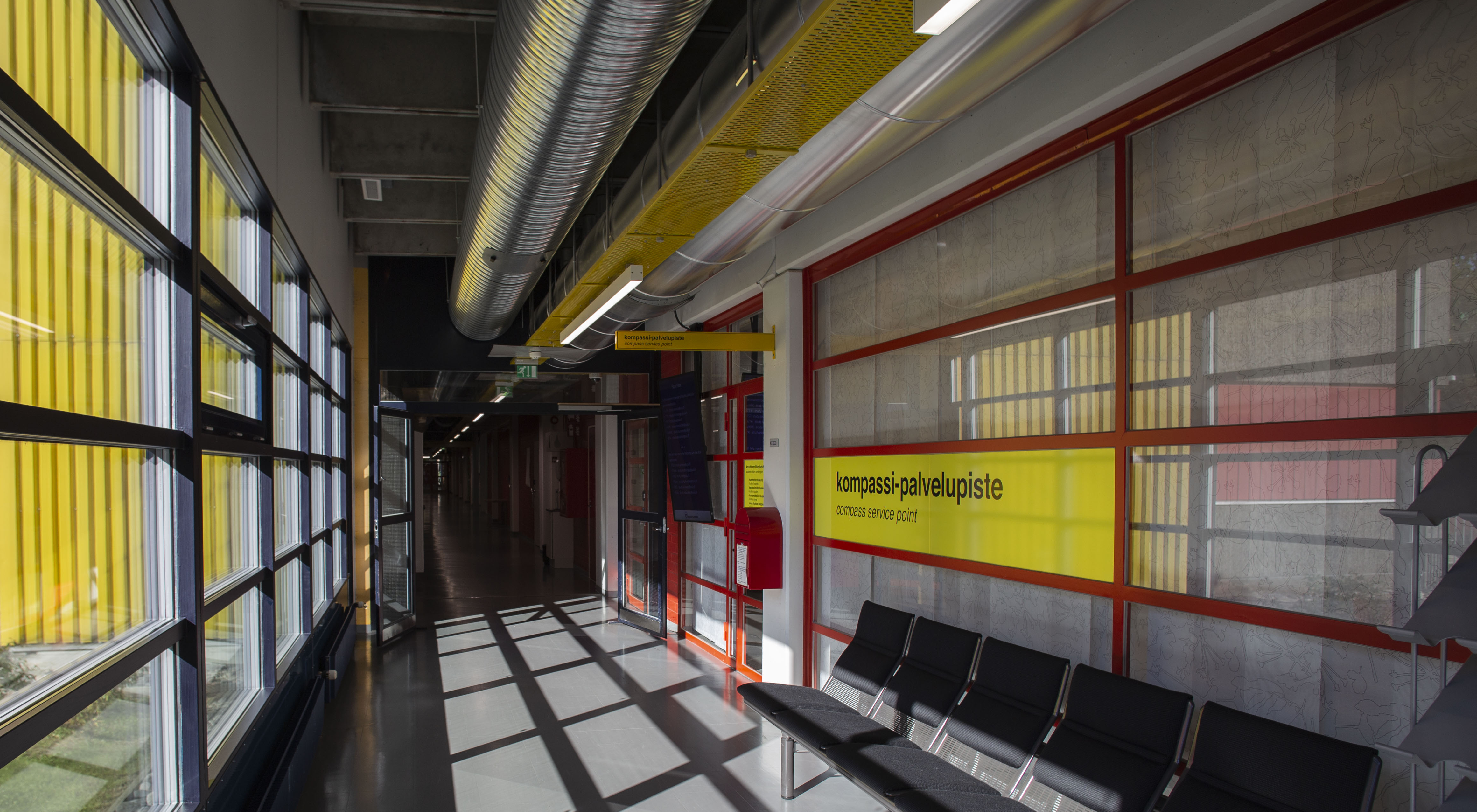 Read this article in Finnish.

The University of Oulu announced that teaching would be arranged primarily remotely also during the second teaching period from 26 October to 31 December 2020. Remote teaching began in September and will continue until the end of the year. Students were notified via email on the 16th of September.

The decision to switch to remote studying was originally made regarding the first teaching period until the 25th of October. Oulu University of Applied Sciences (Oamk) announced they would continue remote teaching until the end of the year on the 9th of September. Teaching will only occur in person if absolutely necessary.

During the second teaching period the University’s policies will stay the same as the beginning of autumn. Teaching will be done remotely, with the exception of courses where being present in person is necessary. Such courses are for example those with teaching in laboratories. When teaching in person, the University recommends participants use masks. The University is also giving out masks to teachers and students who need them during lessons.

Oulu University’s Administrative Director Essi Kiuru says the decision was influenced by both wishes from faculty and students as well as national guidelines.

”Students and staff alike hoped we would reach a decision regarding the second teaching period as soon as possible. The same policies we currently follow will continue to be in effect”, Kiuru says.

For students this means that the campus doors will stay open during certain times and services like the library and laptop vendors will continue to be available for use.

Also influencing the decision were decisions made by other universities, but Kiuru says that safety is still the most important thing. Even then, she hopes to be back in normal conditions soon.

”Our greatest wish is that in spring the situation would be that we could open up the University like we normally would. Unfortunately the situation is not in any of our hands”, she says.

As remote teaching continues, concerns have been raised regarding the wellbeing of students and staff. To Essi Kiuru this topic is especially important.

”It concerns both our personnel and students. Anyone in our community can feel lonely or like they have no group around them. It is everyone’s responsibility to take care of each other.”

Kiuru says all available tools should be used to ensure no one is alone during these exceptional times. For example group assignments and recurring meetings are ways that could help.

Taking care of students and the quality of teaching

With remote teaching continuing the importance of the quality of teaching is bigger and bigger. The University’s Director of Academic Affairs Vesa-Matti Sarenius told us that they aim to improve quality continuously.

”We are continuing to educate our teachers in these matters. There are also guides being made nationally as we speak.”

According to Sarenius the transition to remote teaching was a surprise to many teachers and has brought challenges with it. As the situation continues in autumn the problems are being solved one by one.

”Right now universities have noticed that the problems must be dealt with. We aim to influence the quality of teaching via educating and informing”, Sarenius says.

The Academic Affairs team sees how the abnormal circumstances also affect students. Many are strained. Sarenius says that teachers are told to pay close attention to their students and how they progress.

”If it looks like a student is stuck, we aim to intervene sooner than before. The problem of course is that when you don’t have a group to teach, you can’t look at someone’s face and see that they aren’t okay”, Sarenius says.

As the Director of Academic Affairs Sarenius pays close attention to his own employees and their wellbeing. To him it is especially important to separate work and free time, especially during remote work.

When thinking about communality and the risk of alienation, Sarenius agrees with Kiuru. He hopes for togetherness and good group dynamics.

”Corona doesn’t stop social situations. Our teachers are told to invest in group dynamics also during remote teaching. Of course the University can only control what happens during studies. I recommend socializing with other students during your free time and seeing your friends, taking into account hygiene and social distance.”

Sarenius hopes that students would also use the offered support systems with a lower threshold. He sees that it requires students taking responsibility for themselves.

”The services for students are the same as before, they’re just organized remotely. I would hope students would be brave to use the available services and all the support systems available.”

Exchange is still on the table, though few apply

The University of Oulu also announced that even though remote teaching is continuing, student exchanges for spring 2021 are unaffected. Still, the safety measures have been tightened: arriving students are expected to have a corona test or quarantine and the leaving students will be recommended certain countries and a good insurance.

Corona has affected exchange students arriving to Oulu this autumn. The amount of exchange arrivals has been half of the normal amount and many exchange periods have been cancelled or rescheduled.

International Coordinator Marianne Isola says she is happy with the University’s policy. Even though the number of students going on exchanges is significantly lower than normal, cancelling future exchanges would have undercut a lot of work.

”We have been preparing the spring exchanges for a long time and I am happy we can keep preparing them. We will, however, keep safety as the most important guideline”, Isola comments.

Even though exchanges got a green light from the University, many of them have already been cancelled. According to Isola, many affiliate universities have already cancelled exchanges completely, both for outgoing and incoming students. Exchanges have also been moved from autumn to spring, but the biggest change to Isola is the lack of applicants altogether.

”There were less applications for exchanges than normally. On top of that there were more cancellations or reschedulings. The end result is that about half of both University of Oulu and Oamk exchange students are coming here and leaving.”

The future of student exchanges is facing a big change, Isola thinks. In the future exchanges could be held entirely remotely or only partly in the destination. Regarding the near future Isola only hopes that the situation won’t get any worse.

”It’s hard to believe we would be back to a normal level in students going on exchange. I would be happy if we had the same numbers as now during spring, so half of the normal amount”, Isola says.

Remote teaching at University and Oamk is also affecting services on campuses. The CEO of Uniresta, provider of student priced lunches on both Oulu campuses, Kaija-Liisa Silvennoinen told us that the news came as a surprise.

”We had not received this information before. Now we will have to think about Uniresta’s situation in all this.”

The aim will be to keep the currently open restaurants Kastari, Medisiina and Preludi going.

”We want to keep our services open for as long and as well as we possibly can in this situation. Of course this remote teaching will affect our amount of customers, but even in this first half of autumn we have been able to keep our restaurants open.”

Helping keep the restaurants open have been reduced opening hours. Uniresta’s Campus Shop and H2O campus have also been closed during autumn. Silvennoinen says that Uniresta was planning on opening the Campus Shop and H2O after autumn break, but the University’s decision might just cause a change in plans.

”We will have to further think about whether opening in this situation makes sense and is profitable. It is of course an understandable decision, but in terms of business it’s rather unfortunate. I’m sure it will reflect in the amount of customers”, the CEO says.

There will be no further reduction to the currently open restaurants services. The planned expansions, however, are uncertain. For example Linnanmaa’s student restaurant Kastari’s opening hours were already supposed to broaden in September. Now the evening dining will have to be reconsidered.

”I would dare promise that we will not close any more restaurants and will keep the current ones open. We will try tooth and nail to keep lunch available both in Linnanmaa and Kontinkangas. We can still adjust our operation to the current circumstances. For example Kastari is already being run by a smaller staff than normally.”

Despite the circumstances, Kaija-Liisa Silvennoinen is grateful for students and customers.

”We have come nowhere near normal numbers during autumn, but the fact that customers have had the courage to dine in our restaurants is amazing. In relation to the circumstances we have been happy with the beginning of September. It is wonderful that even a part of our customers have lunch in Pekuri in the city centre or Kontinkangas or Linnanmaa. It is lovely”, Silvennoinen says.

The other business offering campus restaurants, Juvenes, also says they were not in the know of the decision to lengthen remote teaching until the end of the year. Juvenes restaurant and event manager Minna Gehör told us that the decisions regarding restaurants are made one week at a time.

”I haven’t had time to digest this information yet. We will go with what the utilization rate of our restaurants is.”

Currently Juvenes has two restaurants open, Foodoo and Foobar in the Linnanmaa campus as well as a cafe, Café & Juicebar. Gehör says these services have been enough in relation to customers during the beginning of autumn.

”Two restaurants and a cafe have been enough. Our customer numbers have been very small compared to previous years and autumn has been exceptional.”

In regards to the future, Gehör can’t say how it will be.

”We will have to see if the continuation of remote teaching will affect the current amount of diners. It is possible we will have to close our restaurants if the amount of customers drops radically.

After the campus shutdown caused by coronavirus, the University of Oulu opened its campused in August. Even though remote teaching will continue, the doors will stay open. Campuses can be accessed by anyone between 8 am and 15.45 pm during weekdays. Studying on campuses is allowed as long as you show no symptoms of a flu. Libraries and laptop vendors as well as Tellus are available for use. When campus doors are closed, the campuses can be accessed via 24/7-card.

Oamk announced they would move to remote teaching for all students, freshmen included, on the 21st of September. The Oamk campuses are still open for independent studying.

The electronic Exam will continue to be the main tool for assessing learning during the first period, but other alternative methods for completing courses can also be implemented, such as essays, home exams, or learning diaries. Traditional exams at campus are not recommended to be held on the general exam days but organised by the course teachers individually. However, general exams can still be arranged with the safety distance of 2 metres between the students. The same instructions will be upheld until the end of the year.