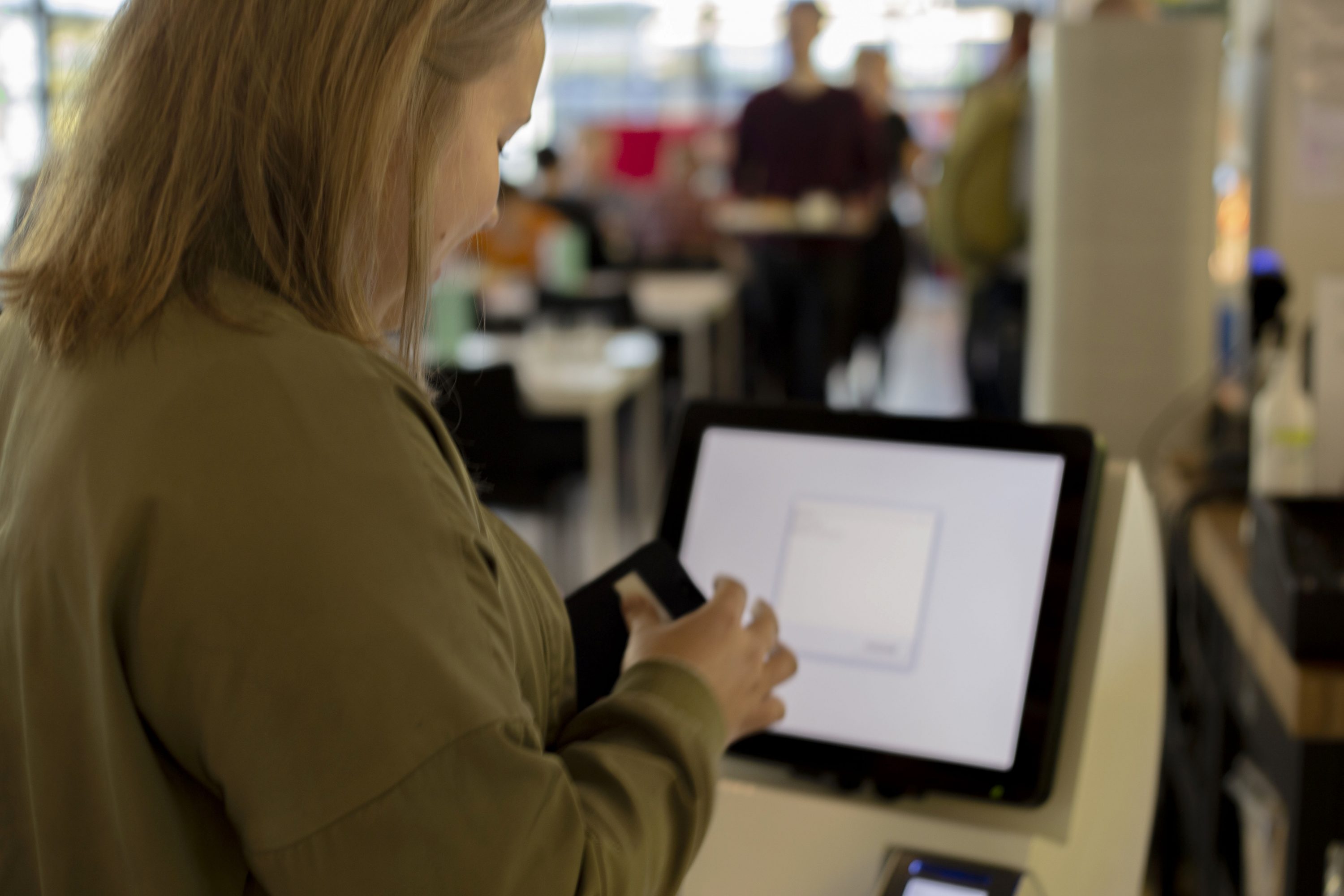 Cultural anthropology student Salla Marjakangas operates the self-checkout at restaurant Foobar on August 27. She found the menus of the counter a bit confusing at first.

Self-checkout has become a common practice in stores and supermarkets. In August, self-checkout machines have arrived in the Linnanmaa campus, in the Juvenes’s restaurants Napa and Foobar.

“The purpose of self-checkout machines is to help with rush hours and to move customer service away from the traditional checkout counters. The main duties of the staff will be guiding and advising”, says the business controller of Juvenes, Fanni Kempas.

Kempas says that the pilot project will be supervised for a few months. After that Juvenes will consider whether they’ll implement self-checkout counters  to their other restaurants. According to Kempas, the machines wont fit in all their restaurants due to differences in the way the restaurants work.

Self-checkout lanes have brought with them changes to both the way paying works and the way student status is checked. You pay the food first, and then you gather the food to your plate. Additional portions and desserts need to be paid separately.

The students use the Tuudo app to access the self-checkout machine and proceed to pay their lunch and possible additional items by card – you won’t be able to use cash. Self-checkout lanes are also available to the staff of the university, doctoral students and visitors.

Similar self-checkout solutions with Tuudo have been previously implemented in two student restaurants in the Capital Region, according to Tuudo.

In addition to the self-checkout project, Juvenes begins a project along with researchers of the VTT Technical Research Centre of Finland with the aim to research the flow of customers and queueing with the use of tracking devices. The goal is to make using the restaurant a smoother experience. The tracking devices used won’t gather data that would make it possible to single out people, so the customers’ right to privacy is not infringed upon.

In addition to Foobar and Napa, Juvenes owns two restaurants at the University of Oulu, Foodoo and Kylymä, as well as three cafés, Tellus, Juicebar and Café Hub. All of them are located at the Linnanmaa campus.

Uniresta: Self-checkout Is the Future

In addition to Juvenes, Uniresta has also considered self-checkout counters. Uniresta, which owned by the Student Union and Oulun ylioppilasapu, owns two student restaurants, Kastari at the Linnanmaa campus and Medisiina at the Kontinkangas campus.

“We are looking into it at the moment, but we didn’t want to be in the vanguard. Self-checkout is definitely a thing which divides customers. We’ve received feedback at Kastari that it’s wonderful to have a real person behind the counter”, says CEO Kaija-Liisa Silvennoinen of Uniresta.

Silvennoinen says that ultimately self-checkout machines would be useful. She says they are the future.

“The way I see the advantage of self-checkout is that the staff is freed to serve the customer better, when there is less mechanical work to do”, says Silvennoinen.

Silvennoinen says that the locations of the self-checkout counters would need to be carefully planned.

”In busy places they would help with the peak of the traffic. At first, when people are just learning to use them, it might slow things down a bit. I do believe that Uniresta will eventually have self-checkout counters”, Silvennoinen says.

According to Silvennoinen, more pressing matters to Uniresta would be the development of the lunch line in Kastari and increasing customer capacity, but the university makes the decisions when it comes to facilities.

At the Kontinkangas campus, the restaurant Medisiina has also suffered from congestion. Silvennoinen says that the problem has been acknowledged and solutions have been planned.

”For Medisiina we have a plan to develop the lunch line, but that would require an investment from the university. Uniresta has been active in the matter”, Silvennoinen says.

Uniresta would develop the line in Medisiina to be a single long line, where the staff could work in the middle and the customers would be on the two sides. According to Kaija-Liisa Silvennoinen, the plan is ready to be enacted.

”From the beginning of September, Cafe Galenos at Kontinkangas will offer a take away lunch option. In a similar manner, H2O Campus helps with the situation at Kastari. At least the staff of the university are patrons, which is somewhat helpful”, Silvennoinen says.

University of Oulu’s Head of facility services Arto Haverinen and cadastral surveyor Timo Haverinen said that the need to change Medisiina’s lunch line has been discussed for a while. The lines will be changed next year according to Uniresta’s plan.

More accurate schedule for the project or Kastari’s situation, were things neither could comment on at the moment.