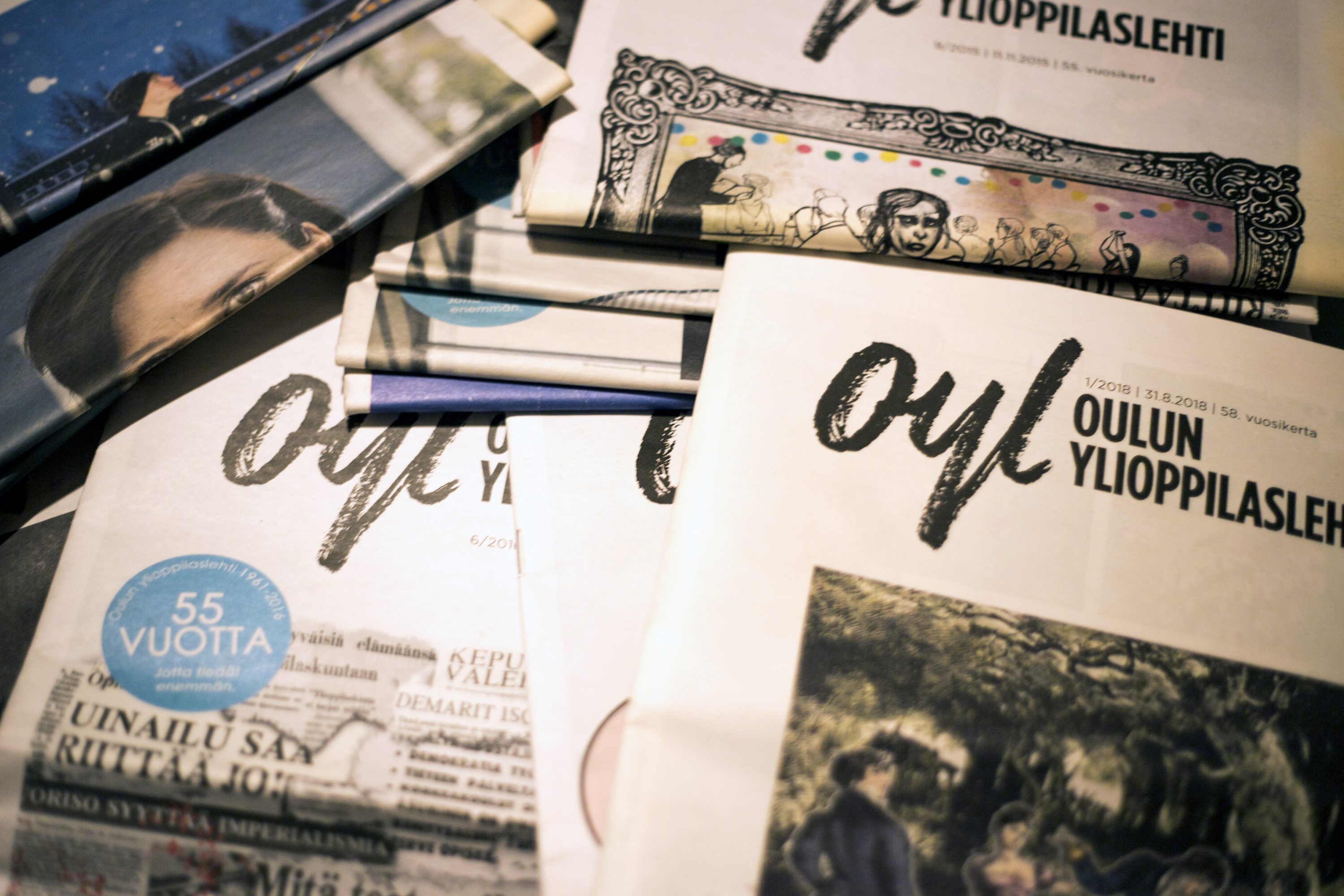 The print edition ended because of a decision by OYY’s Student Council in 2015. Since 2017, the magazine has been published online, with the exception of one yearly print issue.

Financial support from the University of Oulu makes the comeback of the print issue possible.

“The university has promised to buy ad space from the print magazine for an agreed upon sum, and thus pay the extra expenses that are caused by printing four issues,” says Anni Hyypiö, the Editor-in-Chief of the magazine.

Thus, the print issue will not cost the Student Union any extra, but instead the printed issues will make growing advertising revenue possible.

The negotiations Jouko Niinimäki, the rector of the university, and Editor-in-Chief Hyypiö had during the Autumn are behind the print issues’ comeback.

“I remember Ylkkäri from when I was a student. It was an important medium and it was easy to grab an issue and read it in the office or while drinking coffee,” says Niinimäki.

”Printed magazine adds to campus development and well-being, especially as the University of Applied Sciences arrive here. One does not necessarily open and read the online version as often.”

Rector Niinimäki stresses that the university does not want to intervene in the magazine’s contents and journalistic choices of in any way.

“The magazine creates a connection between the students with the teachers. It is good to have a medium that follows the journalistic principles operating in the university community. It even has a certain watchdog journalism -feel, and one can read about the student’s side of things in the magazine. It helps with finding the right direction in developments.”

According to Editor-in-Chief Hyypiö, preserving the journalistic independence of the magazine has been a given to both parties from the get-go.

“I see a lot of plus-sides and opportunities in the print issue. It will have a big impact on the visibility of the magazine. Although the online version has found its readership, some readers have expressed their hope for the return of the print issues. We want to serve all our readers as well as possible.”

“We see a lot of potential in the magazine. Where the last couple of years have seen cuts everywhere, this autumn there have been a lot of instances where the need for finding alternative sources of money has been expressed. This will be just that, as soon as we get the commercial cooperation up and running. Besides, a physical magazine is, well, physical. Even if the online news in the magazine can be found in, for example, Tuudo, it is a whole different experience to read a physical, printed magazine during e.g. a coffee break. Additionally, it has been a great joy to notice that this a force that brings the whole university community together, and it is not only read by the students but the members of the staff as well,” says Kalle Parviainen, the Chair of the Executive Board of OYY, commenting on the decision.

Publishing online will continue as usual alongside the print issue and the contents will support one another. Since the print version comes out only four times a year, its contents must withstand the wear of time.

“Naturally, you will be able to find quick news articles online, and the quality of both formats will remain high. The print issues are a great way to highlight the best stories even more and to reach as large a readership as possible,” says Hyypiö.

The plan is that the print issues will be distributed on the campuses, meaning that you will be able to get your hands on a magazine at Linnanmaa and Kontinkangas.

“The new print issues will be aesthetically pleasing magazines that are filled to the brim with sustainable and interesting journalistic content – so not just the familiar online magazine on paper,” says Hyypiö.

The preparation process for the print issues’ comeback began in earnest only after the Student Council’s decision was made, so many of the details will be made clearer only during the end of the year. However, Hyypiö dares to promise that the first print issue will come out in the beginning of next year.