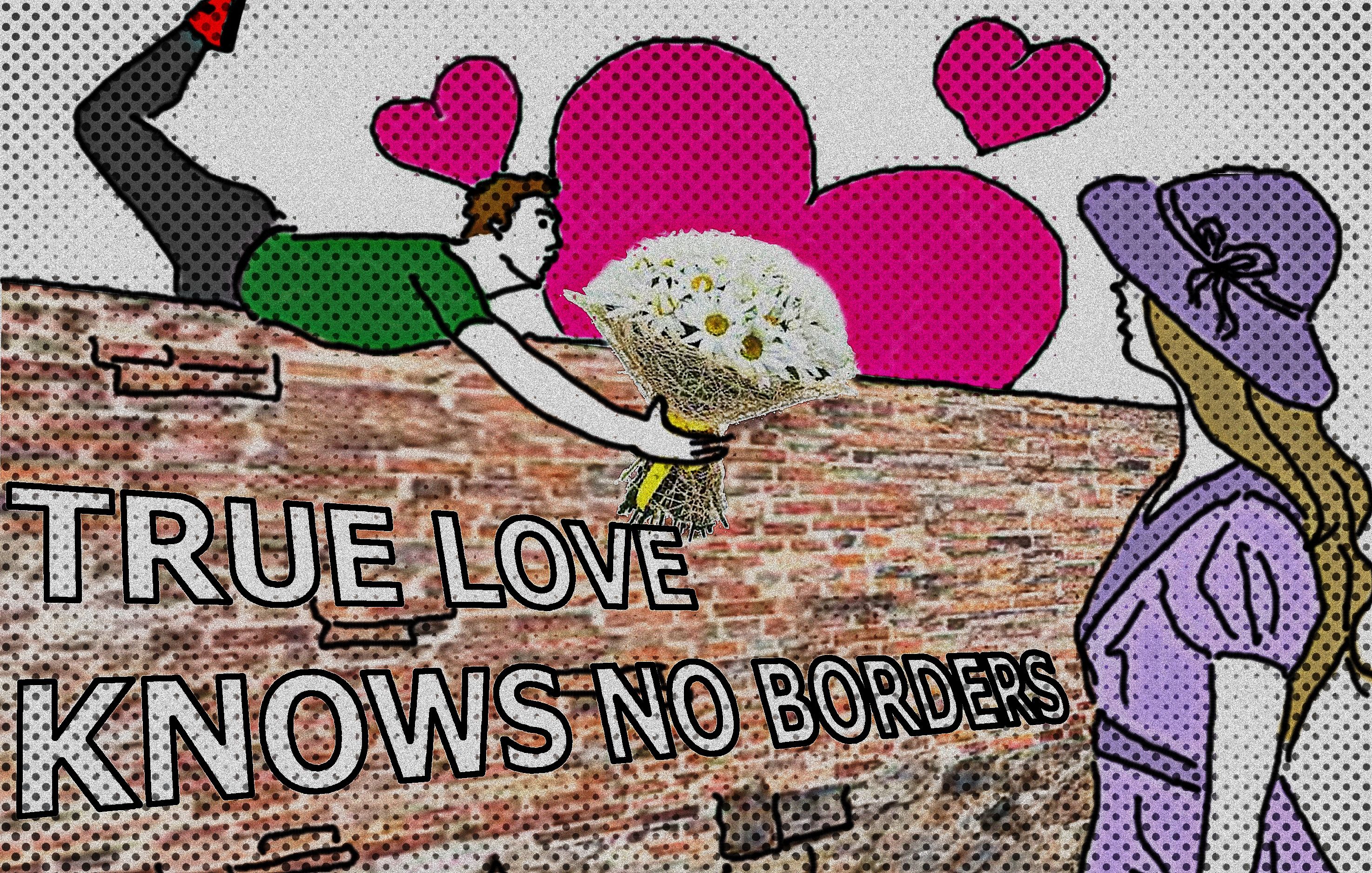 This increase coincided with the growth in the number of professionals, students, and other temporary visitors. Some researchers even connect this to the internationalization of the student body.

However, it doesn’t seem to be one of the main factors once we look at the numbers provided by Statistics Finland.

There is no data yet for 2016 but in 2015 the total amount of multicultural marriages was 3826 in total by a slender majority of Finnish men marrying foreign citizens.

According to Helsinki Times Finnish women in their 20s and 30s marry foreign men much earlier than Finnish men marry foreign women,and they do so in growing numbers. Besides, international marriages are more common in the capital region even though their number seems to be going down. Helsingin Sanomat reported that more than 26 percent of residents in Helsinki married a foreign citizen in 2007 but the number fell to 15 percent in 2011.

If we look at who the Finns actually marry, there is a striking difference between Finnish men’s and women’s choice of a spouse. While women prefer marrying citizens of Turkey, the United States, Russia, the United Kingdom and Sweden, men marry citizens of Thailand, Russia,  Estonia, China and the Philippines. 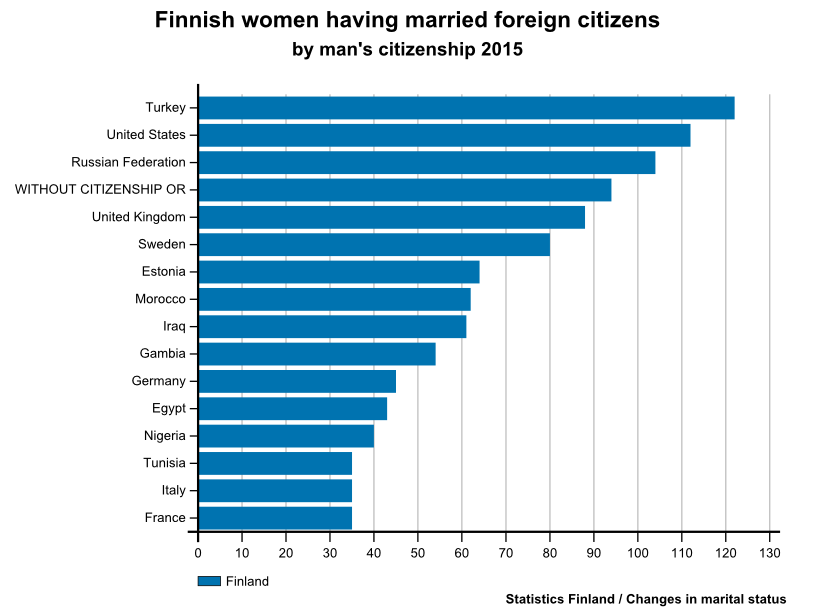 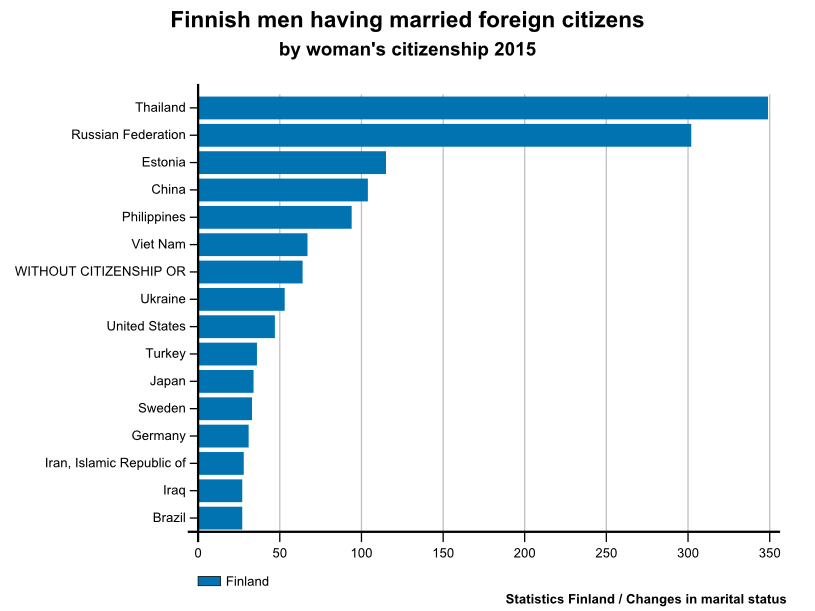 If we let some stereotypes sneak into this article we might assume that Finnish women simply go for a personality opposite to that of a stereotypical Finnish man: socially awkward, reserved, quiet, silent and idle in the relationship. This could be the reason why some Finnish girls seek a company of someone more talkative, flamboyant and proactive. Vice versa, some Finnish men might pursue a woman who is not a strong feminist and go for a more family-oriented, man-focused, homey and submissive woman. This just an assumption based on pure stereotypes we should stay away from. Let’s look at the numbers below without jumping into conclusions.

Internationalization of higher education could be one of the factors favoring intermarriages. Unfortunately researchers have failed to seriously examine how student migrations lead to marriage migration if they do. It does seem logical to expect that the intermingling of young adults of different nationalities and races at university levels reflects the increased rate of intermarriages in the long run. At the same time it is a very slow process and judging by the recent investigation, Finland has a lot to do to improve and speed up its internationalization programme.

On the other hand, education in general is of paramount importance for deciding to marry someone outside of your nationality group. University-educated people tend to have a more individualistic attitude, be less attached to their family and community of origin, and have a more universalistic view on life. In addition to this, they simply have more chances to meet members of other nationalities at universities or high-status occupations and have some common language to speak with the future spouse.

Being in a multicultural relationship is not that easy. According to Corey Heller, of Multilingual Living Magazine, “International marriage isn’t always filled with rolling R’s, melt-in-your-mouth chocolate, blossoming roses and ’until death do us part’. It also comes with heart-wrenching and, at times, heart-breaking realities that make us question our choices.”

Heller voices difficulties in international marriages that include being far away from home, loss of national traditions, cultural misunderstandings, learning the language and visiting families. There are also other issues that can complicate the relationship: economic dependence on the Finnish spouse in case of the low-wage job or unemployment, informational dependence in a new environment and the language barrier.

If the spouses manage to overcome these difficulties and still love each other it is a great example of a strong balanced relationship. In this case it is true devotion, mutual respect and definitely not a marriage of convenience because there are actually so many inconveniences involved in it.

Happily ever after? Government mixes money and marriage

Thus, a year ago the government announced its plans to discourage immigration by introducing tougher family reunification rules. According to Yle, these measures can also affect Finnish citizens who want to settle in Finland with a spouse from outside the EU.

Yle suggests that rules will call for at least 1,700 euros net income a month if the spouse does not have a job waiting in Finland. If, for example, a Finnish citizen married to a non-EU national who’s lived abroad wants to return with a spouse and one child the family will have to net 2,200 euros a month. A couple with two children will need to net 2,600 euros.

A great number of social organizations have criticized the income requirement, including UNICEF, Amnesty International and the Federation of University Students in Finland (SYL). The latter pointed out that in its current form, the amendment would prevent low-income students from bringing their spouses to live in Finland and would also prevent educated couples or families from temporarily living in Finland.

What does the future hold for multicultural marriages in Finland? It looks like the Finnish government is overly concerned about people coming to Finland from outside the EU, whether their intention is to study or get married.

That left aside, Finns themselves seem to enjoy the idea of having a foreign spouse and care least about whether he or she comes from the European Union or not. Numbers never lie, and love knows no borders.