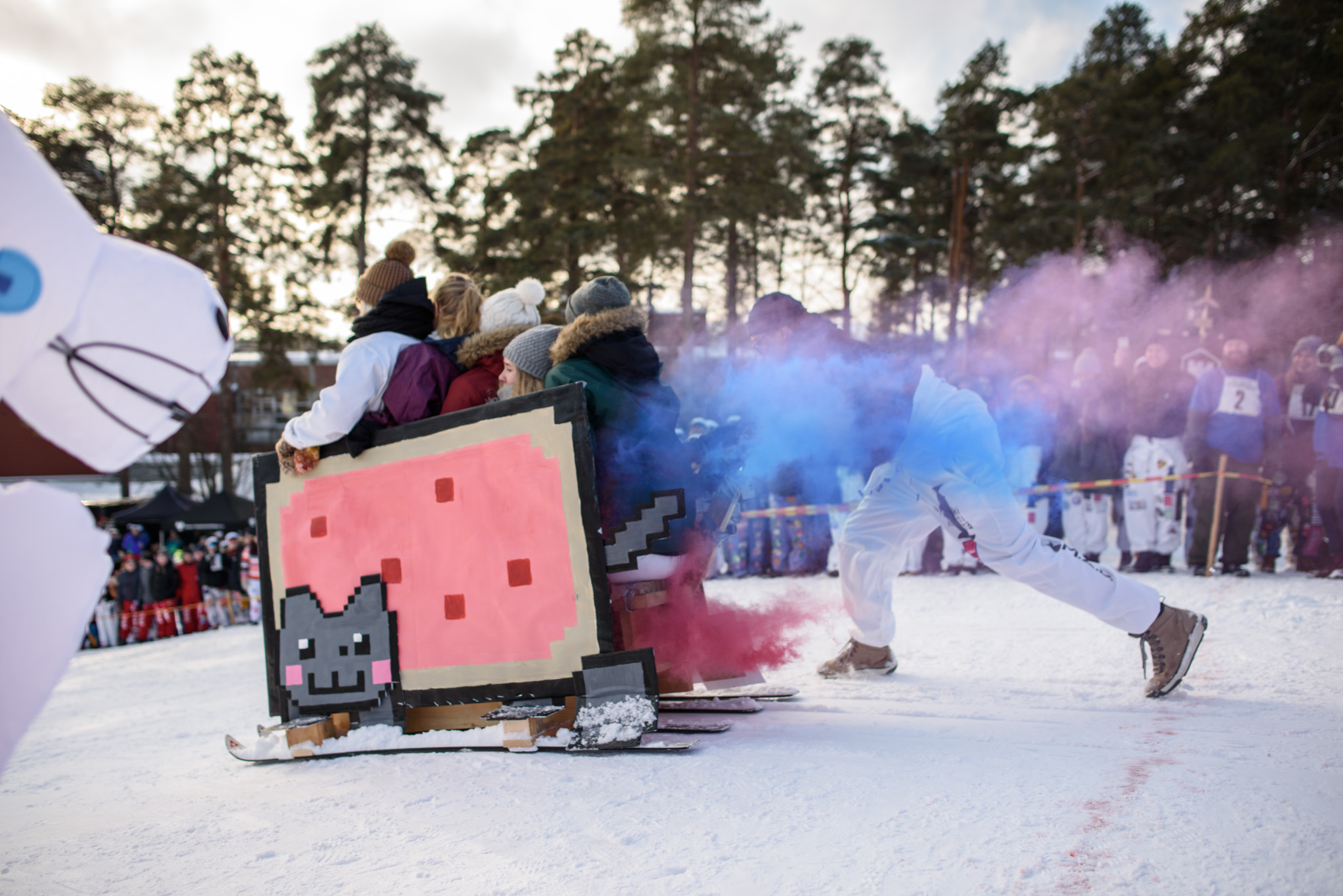 In Finland, Laskiainen is celebrated with winter recreational activities such as skating, skiing, and sledding. In Oulu, the guild of Mechanical Engineering organizes an event in Laskiainen Tuesday.

Oulu is home of one of the most creative pitching events in the world. During Polar Bear Pitching, entrepreneurs from around the world gather in Oulu to pitch their business ideas to potential investors. There is no time limit for the pitching. There is a catch, though: they have to enter a hole in the frozen Baltic Sea and pitch from there. The time limit is the time they can stand being in the chilly water. Attendees are able to not only listen to the pitches, but also partake in workshops and listen to inspiring talks. (Source: Polar Bear Pitching)

Shrovetide (Laskiainen) was originally a religious pre-Easter celebration preceding the beginning of Lent. In Finland, Laskiainen is celebrated with winter recreational activities such as skating, skiing, and sledding. The traditional food of this time is pea soup and pancakes, as well as sweet Laskiainen buns (laskiaispulla).

In Oulu, the guild of Mechanical Engineering organizes an event in Laskiainen Tuesday, starting with a charity event where the proceeds are donated. After that, a sledding event in Raksila, at Reikunmäki hill takes place. During the first part of the event, teams compete in a sledding race. After that, the demonstrative class follows, in which customized sleds compete in terms of creativity and speed. After all the races and demonstrations, the hill is open for anyone to enjoy some sledding. The event culminates in an afterski party downtown. Did you miss this year’s sledding event? Check out our gallery! (Sources: Laskiainen Event Page, Nordic Recipe Archive)

Historically, not much is known about the real origin of Valentine’s day. It might have religious origins, which explains the “Saint” in St. Valentine. The most popular story is that Roman Emperor Claudius II believed single men made better soldiers and thus forbid them to marry. A priest named Valentine started performing marriages in secret, which led to his execution.

In Finland, Valentine’s Day is known as Friendship Day (ystävänpäivä). This day does not usually have the romantic overtones it has in other parts of the world. Instead, it is the perfect day to show your friends how much they mean to you by giving them small gifts or sending them postcards.

Nevertheless, that does not mean you cannot do great romantic gestures for your special someone or significant other. Love knows no bounds. (Sources: History, Big in Finland)

A little less known gem from February is the The Day of Finnish Culture or Kalevala Day, which is celebrated on the 28th of February. This day is special, as it is the day when Elias Lönnrot, author of the Kalevala, wrote the foreword of this epic poetry compilation in 1835. This day is also a flag-raising day for Finland.

The Kalevala day is an important day not only for Oulu, but also for Finland, as the book itself represents Finnish identity, language and culture. Even though there is not a fixed happening every year, you should keep your eyes open, as there may be cultural events organized by the City of Oulu or the Library of Oulu. Why not organize your own cultural event to show your Finnish pride, even if you’re not a Finn! (Sources: Embassy of Finland Bucharest, Kirjastot.fi)

The time Earth takes 365 days and 6 hours to make its revolution around the Sun. Instead of having a very short day at the end of the year, we wait for every fourth year and add an additional day to February.

As with most things, there are various beliefs and customs surrounding this date. For example, a person born in this day – a leaper – would be believed to be favoured by fortune or be innately talented.

One of the most common belief is that this is the only day when ladies can propose to their gentlemen. Should the gentleman refuse the proposal, he would be obliged to compensate the lady with money and garments.

Naturally, in today’s more civilized society, anyone can propose to anyone, and some couples might use that specific day not only to propose, but also to get married. The next leap year will be on 2020. So ladies and gents, get those rings ready by then. (Sources: Telegraph, Snopes, TimeAndDate)