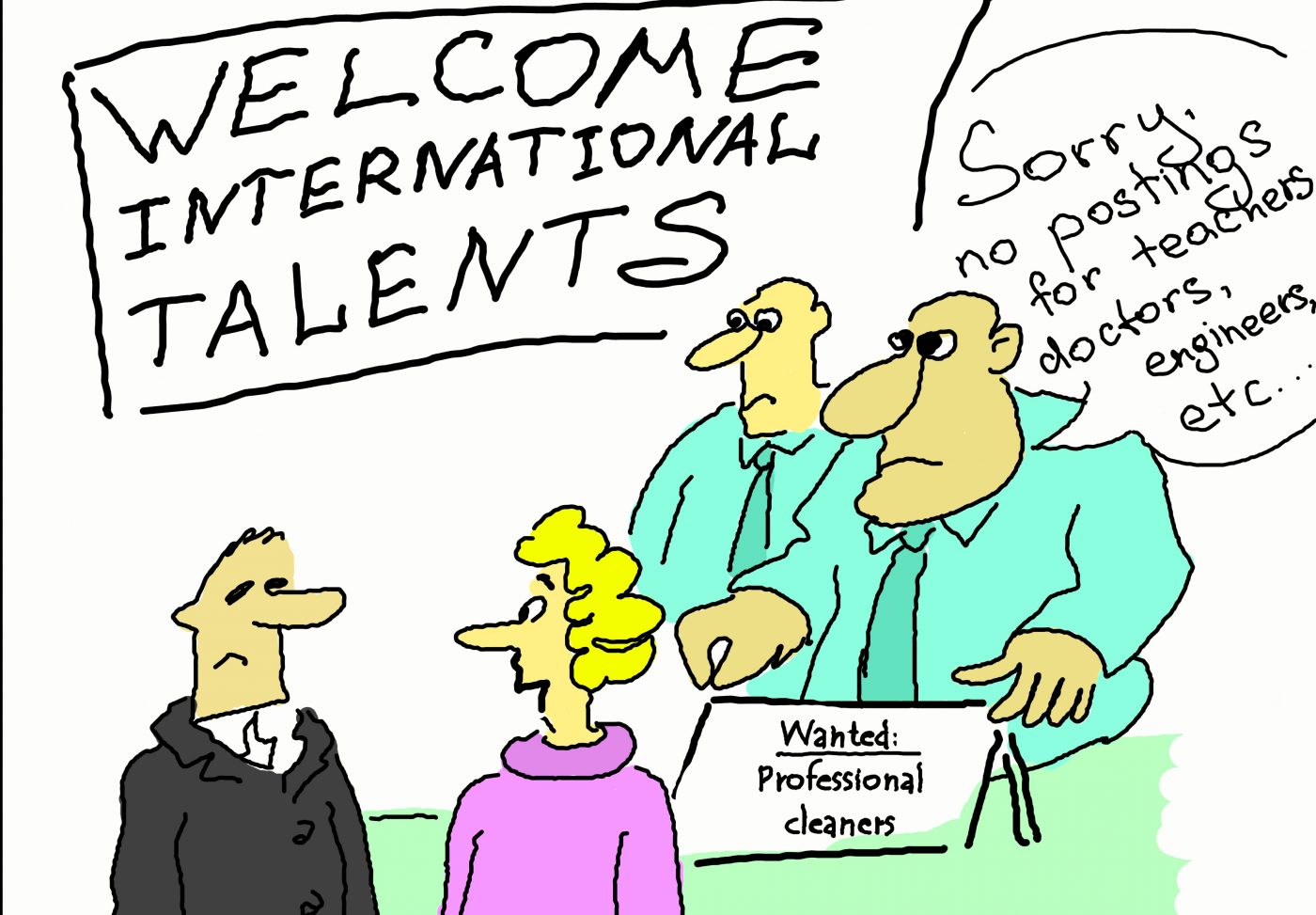 “One by one asking them about any work possibilities. It turned out that they didn’t have much to offer but told me that I had to find a job on my own. I went to the employment office at Torikatu. They said that I should apply for different positions at mol.fi and visit recruiting agencies, since they could not help any foreigner to find a job here – they can only help Finnish people.”

It seems Finland can provide only its citizens with safety nets like different employment programmes, social welfare, training, networking, etc. At some point immigrants that come here for a reason different to studying are in a better position as they are supported by Kela, which offers them free of charge Finnish language courses, work training and monthly payments. Basically, Finnish policy is built to assimilate foreigners rather than integrate them, and that’s the problem.

“They had the same reply: I should apply online and there are not many possibilities for foreigners who don’t know Finnish. The conversation I had with a person in charge was quite unbelievable.”

Alex has been denied a cleaning and snow-removing job, as apparently they cannot hire anyone without experience in this particular area.

“That was funny because on the same day I learned that another student from my university had got that cleaning job merely on the basis of reference he received from people of his own community in Oulu. Much justice, right? But more than that it was so ironic.”

As a result of such a disappointing experience, now Alex sees no hope and finds himself isolated since he has got no references or community at his back so far. The tipping point was reached when he had been denied a volunteering job at NGOs and animal shelters in Oulu despite his motivation and experience.

Alex is not alone in this situation. Marina (name changed at interviewee’s request), an Oulu university graduate, says that 70% of her groupmates left Finland for the reason that they could not get employed here. Those few who stayed either got a job thanks to their personal networks and bonds or their good command of the Finnish language.

“When I was searching for a job, I was so upset because of the Finnish language requirements. I didn’t have a chance to learn it properly as I had been working since my second year at the university. All the time they chose someone Finnish over me”, Marina tells us.

Marina tends to believe that there is a trust issue among Finnish employers – they’d rather take a Finn than a foreigner even if the latter seems to have more competence. Marina is working as an HR person herself at the moment, and she assumes that international candidates can sometimes put a twist on their skills and experience and that might raise hackles. The motivation can also invite some questions – if a foreigner has such a wide experience, why would he or she want to take this low-paid job? “In order to survive” does not seem to be an answer convincing enough.

There are many other stories when international talents were dismissed on disputable grounds, paid less than the Finns for the same range of responsibilities, denied a job for the reason of being overqualified or not qualified enough in one out of 10 necessary skills. But the most outrageous of all is the reason that they don’t have a native level of Finnish. Native! Just for your information it is pretty illegal to require it, according to the Finnish law.

So, can we call it discrimination? To a certain extent, yes. However, the most confounding factor here is that the Finns don’t mean it in the majority of cases. Finland is simply not an international country yet. They don’t know how to deal with foreigners, how to be around them, how to use their expertise, how to arrange the work process in English, etc. They are constantly overthinking!

The best solution would probably be to just try to be more internationally minded, take a foreign intern to work part-time, for example, and see how it goes. And hopefully after a few years of a positive experience, Finland will finally give up its current approach of making Finns out foreigners and then being unhappy about the unsatisfactory level of their “nativeness”.