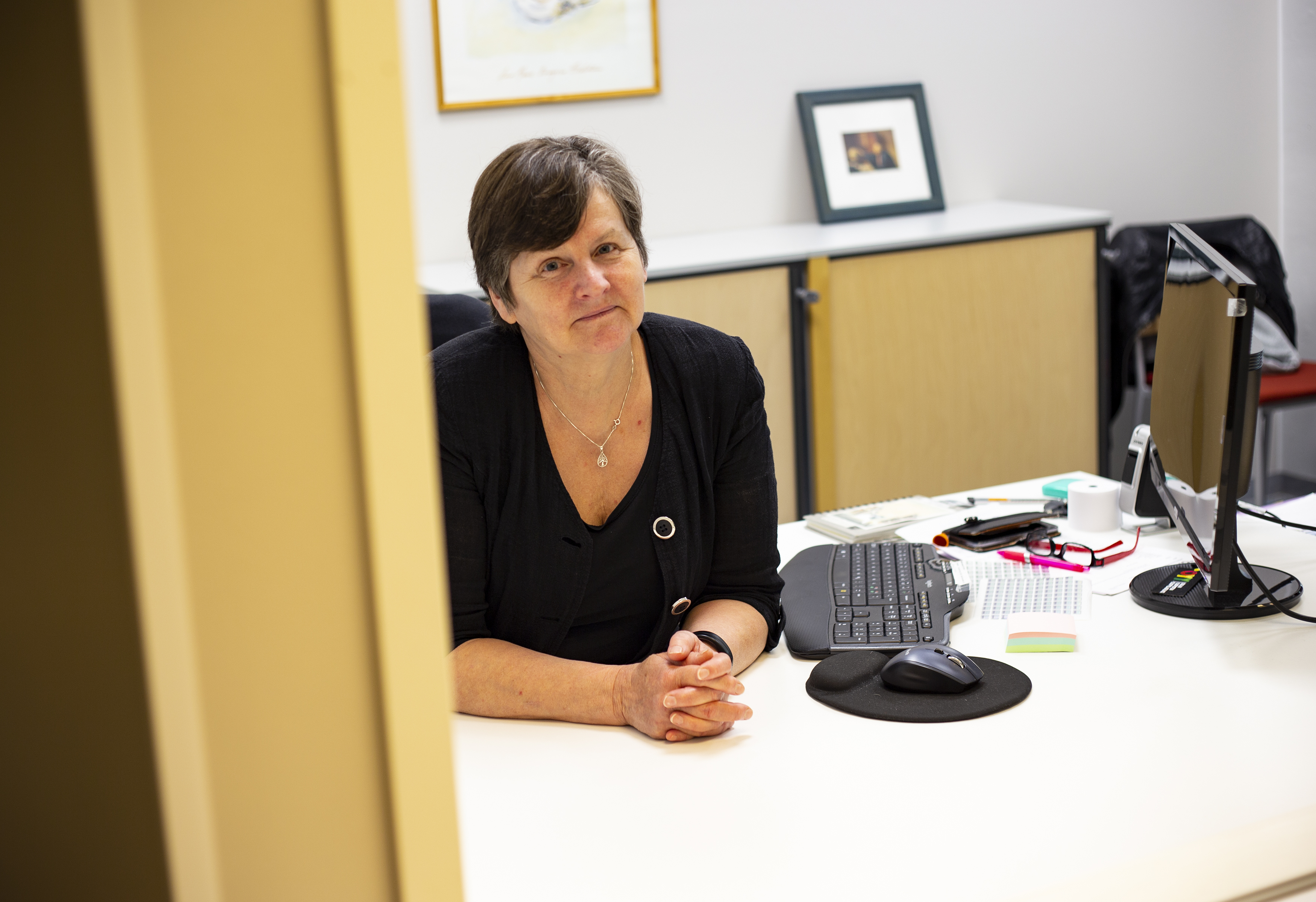 Riitta Kaleva likes to read. If she were a character in a novel, she would like to be in one by the Chilean author Isabel Allende. “I like South American writers. Or I could be in a Cuban novel as well, those are completely mad.” It does not matter, as long as the book has plenty of imagination. She likes books that mix reality with fantasy.

Let Me Be Alone in Peace

If Riitta Kaleva could decide, this would be the title of a film depicting her life.

There is a reason for this choice. First, she does not like forms that require various explanations or detailed accounts of things. She also prefers to spend time on her own.

Doing this interview and answering all the questions felt rather awful for her. But it had to be done before her retirement.

You just have to pick up the pieces again, do the unpleasant thing, and carry on. With this mentality she has survived the tough spots.

While very few students would describe the Student Union as something near and dear to them, Kaleva was familiar to many as the Office Secretary. She has placed thousands of term stickers and sports passes onto countless of student cards, given and received keys for the rentable sauna at Manne, and always being the first to meet the customer at the office.

And, of course, answered a plethora of questions from the students.

“I’ve been asked everything. Can you pay with cash at the bus? Or can you receive sexual counselling from this phone number?”

The work she has done for the students of Oulu has been noticed. In February, Riitta was awarded the highest-ranking Honorary Badge of the Student Union.

Before working for the Student Union, Riitta Kaleva worked in the municipality of Siikalatva in the Arts and Crafts Institute of Piippola (nowadays the Piippola Vocational College) as a coordinator for housing and recreation. She studied to become a counsellor in youth work, and eventually she did work with young people for her entire career. “I know of nothing else.”

Riitta Kaleva was the Office Secretary of the Student Union of the University of Oulu for a bit less than fifteen years. Originally, she applied for the job as she wanted to work in Oulu. Her first day on the job was at the beginning of November in 2005, and she quickly grew attached to the work. As she started, she mentioned to the then Secretary General Mikko Nissinen that she would leave the position only when she would retire.

And that is what happened.

Throughout the years the office of the Student Union moved a few times, but some things stayed the same for Kaleva. A few familiar faces picked up the new term sticker every year since 2005. Also, the worries and things troubling students stayed mostly the same, Kaleva assesses. Although, now graduating is one of the things stressing the students, she says.

There are changes as well. According to Kaleva, the current students behave well and are polite. There is also noticeably less binge-drinking and other unwanted rowdy behavior.

Moving from the Mannenkatu office near Rauhala to the old premises of the Language Center at the Linnanmaa campus in 2012 tripled the number of customers and made OYY closer to the students, Kaleva surmises.

But she did miss the old place. At the Mannenkatu office, Kaleva used to open the window at noon so she could hear the bells of the Oulu Cathedral. Summer or winter, the window was always open when the clock struck twelve. The boom of the bells did not reach the Linnanmaa office.

Another wave of new customers arrived when the Student Union moved again in the autumn of 2016, this time within the campus to the old premises of the Faculty of Natural Sciences. These people sought direction inside the campus that had become maze-like and was changing constantly due to all the renovations.

Again, it was time to advice, help, and guide. But that was not too bad: Riitta Kaleva hopes she will be remembered by the acts she has been allowed to do for others: aiding, helping, or guiding someone.

Riitta thinks that it does not matter who helps, or even if that person fails to realize that they have been helped in the first place. Actions and acts are the most important, not the people doing them.

According to Riitta Kaleva, her greatest success is that she has managed to live a rather happy life.

“I have started a new life many times: I have changed jobs, even my marital status.”

When asked about a motto, Kaleva cannot really answer (“I have such a bad memory that I would probably have to change it weekly”), but people make her happy. On the other hand, climate change causes her concern.

In other people she appreciates joyfulness, openness, politeness, and curiosity. But how does she think other people would describe her?

“Probably as a mother. I have given so many lectures to others!”

Being deliberately mean and mistreating others makes her angry.

“One can misbehave accidentally, but not consciously! You must also be prepared to do as much as you are demanding from the people around you.”

Her perfect day would go something like this: waking up in the morning in a cottage, sitting on the balcony drinking coffee, looking out at the sea. And in the evening, it would be time for more coffee.

“Sea is my mental landscape.”

Kaleva is unable to visit her cottage in Ii weekly, but when she does go there, she usually stays there for a whole week, sometimes even two. At the cottage she does gardening: planting pumpkins and potatoes in the rugged earth. There is some yield, though a rather moderate amount.

“A garden plot of my own is something I miss.”

When doing this interview, there is a calendar made of cardboard on the wall of the office. It is counting down the days left before retirement. There is just a single red note left: one final working day to go for Kaleva.

Her desk is not completely empty yet: there is a sheet with term stickers next to the keyboard (“I have given a few stickers today”) and a FSHS accounting form.

Kaleva and Nina Schroderus, who started in August 2018 as the new Office Secretary, have been working in the same space for the past year. During this time more and more of the work has been done by Schroderus.

“I am not slacking that easily. In the morning I still had a list of things I have to remember to say to Nina. I have not given up just yet, maybe tomorrow it is time for that.”

If there is one thing Kaleva will not miss from working life, it is the word must. Must do, must remember, must go. No more must-ing.

At the start of her summer holiday, Riitta Kaleva bought a new backpack. It had to be light and durable, one that is comfortable in both far-off lands and in the fells of Lapland, one that is good for any journey.

And on the very first day of her retirement, the first of August, Riitta Kaleva went on using the backpack.