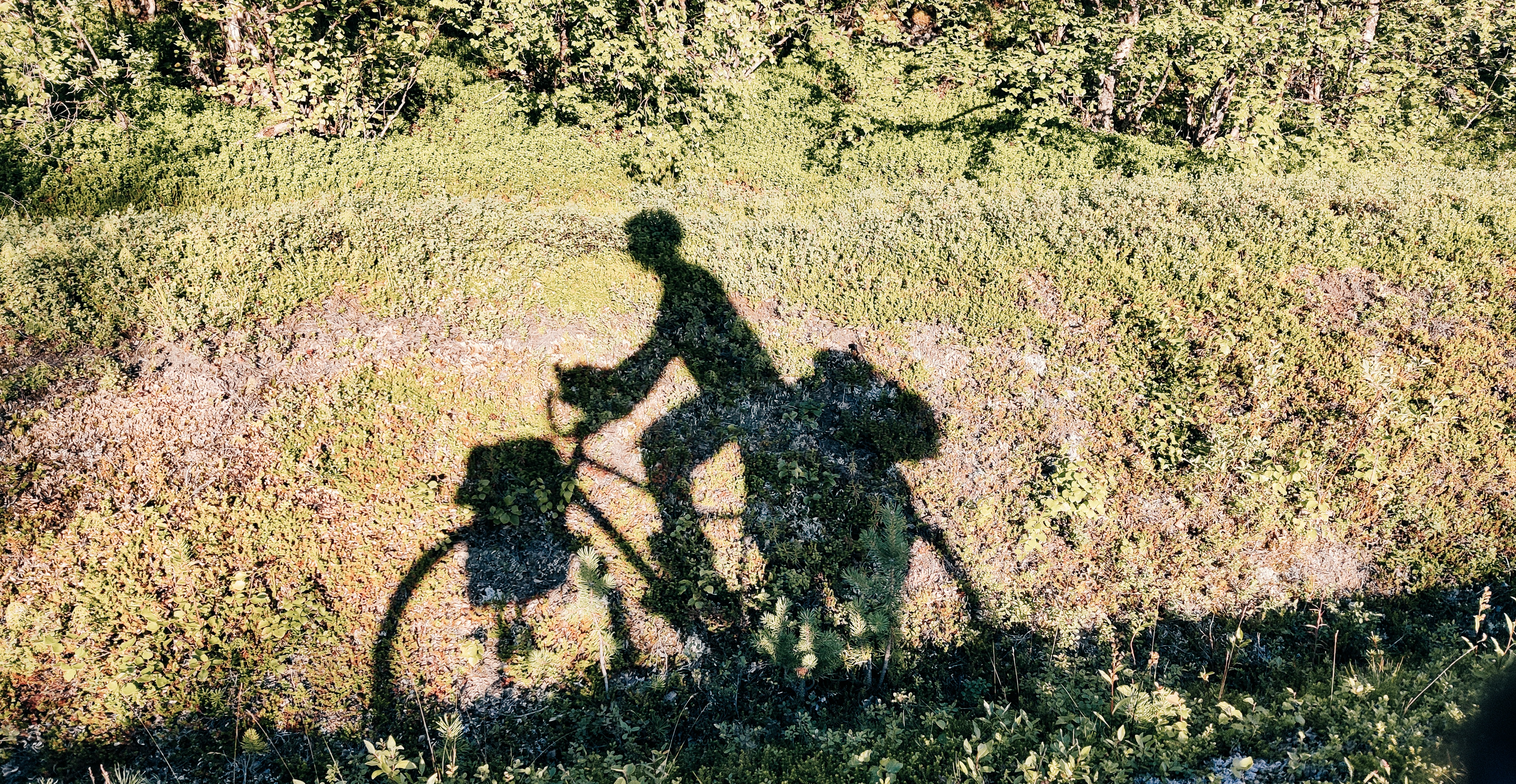 Rishikesh Raut went on a journey to the essence of Finnish state of mind: Riding his bike towards the Northern Finland, exposing himself to the elements of the nature as well as its tough love. This is Rishikesh’s journal of his six days on the road.

As I was now riding towards Ylitornio the road began snaking through lush little hills. Like sleep sneaks in on a classroom-under-performer who has just started studying, Lapland pulled me in its lap without clear notice. The roads contributed to their act; they equally climbed and dropped, over and over. In retrospect, they climbed more.

I was thanking and cursing their architects on an hourly basis, for the 40 km/h downhill blurs and the 8 kilometre per hour uphill battles. In retrospect, I mostly thanked.

Google Earth guided me through an unpaved path through a forest, as I stopped once to speak with uninterested horses and then to wet the weeds with personalized minerals. The little gamble had paid off as I avoided the extra miles. For an hour or so, I rode through the trafficless road’s median – as one does when they own a highway.

After a million pedal rotations and 30 odd kilometres, signage showed I was approaching the Arctic Circle. This was the stuff of my geography lectures as a kid. As a grown up kid, I read about Mike Horn, the maverick explorer who circumnavigated 20 000 kilometers worth of this circle. And now I was going to touch it.

It is my suspicion that the Earth doesn’t care much for human ambitions. Mike Horn, Bill Gates, and The Monk Who Sold His Ferrari will all taste the same to the soil that will devour them.

So I wasn’t surprised when I didn’t see red ribbons and scissors, as I biked through the forehead of our world.

He was on the other side of the road. He crossed and overtook. Thereon, he raced me for a few kilometers as I neared my day’s quota of 100. We spoke no words with the other biker; the language of competition was enough.

During these six days of living by the E8 highway, I got addicted to letting strangers take charge of my bike. Motorbikes, cyclists, walkers – whether it was a thumbs up, a wave, a nod, a smile, a greeting. They had their own distance ratings. If only briefly, these exchanges with fellow beings were like a balm for the mind as the physique grinded.

When a lone traveller traveling waterless through a desert has the liberty of sipping water only once every five hours, he will drink differently. He will swallow it instantly, but in that little instant when it is moving throatwards, he will know the quality, the essence of it.

For hours on end, I would not see anyone, assuming all passing cars were passengerless. So even though I exclusively romanced the wilderness, whenever my eyes met another human, I bathed in the oasis of that fleeting connection, and let them ride my bike for me.

I have a love-hate relationship with sleep. It’s like having a permanent toxic friend. She’s a pain, but I need her.

Some nights I don’t want her at all. I want to skip all the time I’m supposed to spend with her; being alive is just so much fun. And other days I want her for all-time. For reasons unknown to me, I want to be in her embrace until she has no more dreams to show. On those days, mornings become afternoons, and into evenings, after I have forced her further, she shoves me away, and leaves me to deal with the chunk of life I just missed. That’s what had happened on the first night out in Simo, when I had slept until 5pm, 14 or so hours.

Every day after that was different. I planned to wake up at 8 in the morning, so I did. I wanted to do that and this, so I did. With no effort.

But on this day, starting from Pello, the ride had begun with exertion. The sun concealed the little city with fat clouds, and the extravagant ball overloaded with flaming red could only penetrate a beggarly gray into the landscape. Its failure to show itself meant that mortal souls – especially those indulging in unreasonable unsheltered endeavours – would make music using teeth. So, I began bargaining.

When I had biked 15 kilometres from Pello, I was going to do 85 more. I remember reaching the crest of a bridge which stomached a railway line, (underly/overly) when the deal was struck. Like two egoistic men racing each other to an elevator button at-once – two thoughts arose.

A switch had flicked.

Exploring new corners on my bike, I thought about how much of my life is governed by my brain. The bastard has its own mind. By a mere whim, on mere impulses, it decides what I can and cannot do. The difference between possible and impossible is decided by which side the brain flicks the switch.

If a mathematician was to solve the equation of a man’s life up to a certain point, of course, he can foretell what the man is going to do next based on the variables of his past experiences. But until such a boring technology is born it is safe to assume that the flicking of the mind switch can be manipulated.

Our minds are masters of negotiation when dealing with ourselves. Whenever you negotiate with someone, you always aim for the highest value – by gains or savings. But when your mind negotiates with you, it always aims to lose value; unless you consciously push for higher value.

Like expert negotiators do, the mind, armed with logic and science, tells us why the aimed value must be decreased. Whether to accept it, is a choice we get to make. If you accept the deal, no one will notice. No one cares. It’s like an Ocean eroding a beach, one sand speck at a time – separating it from Earth’s embrace for its ulterior motives. No one will care except the sand specks who dreamed of sunbathing.

So, knowing its nature, the Mind’s, is it possible to never negotiate?

As I swerved into the trail leading to lake Tapojarvi, the land smelled foreign. As every land always is, for its always changing, only too slowly for our unperceptive eyes. But with its sparse civilization and boundless woods, this land was more foreign.

Towards the end of every day, as I neared the target distance, the air would invisibly inject me with a serum of anxiety, using a syringe of anticipation.

These feelings arose due to the complete lack of assurance. “Soon I will rest”. And it meant putting faith in the graciousness of a major river, or an unnamed lake, as it would give me space to lie for the night.

Men of the Sahara Desert, if forced at gunpoint to sleep and dream a fantasy of a homeland littered with a certain life-giving liquid, would perhaps imagine a typical Finnish landscape. So, finding a gracious water body in Lapland was always a game of promising odds.

I was led by an unpaved trail through a jungle, and as I showed myself to the lake, a flock of swans or ducks or messengers of someone who wanted to say, “you can sleep here” flew off from before me, leaving for me, a little of their vast silver-grey kingdom of water, a little of their dew-laden soil and a little of their woodland’s breath…